It has been a yearlong process of making these sculptures…

I would like to start by thanking Margret, she has been a wonderful client, who trusted me with the direction of the work and was gracious about the time I needed to make it – a year in total!! We met on Margret’s property in January 2019, when she offered a handful of words and 2 locations to inspire 2 sculptures. The words were contemplation, serenity and birds that were to be encapsulated in a smaller work (that included a birdbath) to be located in a garden courtyard. A larger work was to be positioned 10-15 metres away from the first (and the house), which was larger in scale. It was a bigger job than I initially imagined and so I went home and got to work!!

They are very process driven sculptures as I am dedicated to recycling and it’s been central to my practice since the beginning. I was limited in my welding resources, I could cut and weld forms, but I couldn’t heat and bend metal, so these constraints informed the way that I worked and the structures that could be made. I started by collecting metal from the Daylesford Tip and from a friend’s property and bought it into my home studio. I cut the steel with the grinder and arranged it physically until I was happy with the 2 basic structures – a butterfly wing and an abstract bird shape! I then cleaned the metal, welded it and applied kill rust so the metal ages at a uniform rate.

At that stage Marg visited my studio in Mollongghip during the Easter holidays to have a look. She was pleased with the basic steel structures, so I had the go ahead to start weaving. I started weaving into the smaller ovoid shape of the large sculpture and traced the shape (including chain links) so that I could plan the weaving design on paper. I then made paper patterns for each piece, traced them onto copper plate, cut them with tin snips and inserted them into place. This extended process helped me think about the direction of weaving I wanted to achieve in the wing. The directional lines imply energy and movement rather than realistic feathers. So, the bird spreads its wings and the flow of energy is implied and happens in the imagination. I kinked some of the copper plate as I didn’t want the weaving surface too flat, which created ridges I could follow with the copper wire weaving. I have used a basic under over weaving technique, but it is interrupted with random weaving. There is a bunching up of wire lines around the bird’s shoulders and the lines run in particular directions to imply movement. After weaving the smaller wing on the large sculpture, I felt more confident to tackle the butterfly wing which I wanted to be subtle and detailed. I knew that it would be viewed closely so it is a finer work. I bought that indoors and worked on it for a couple of hours each night during winter. 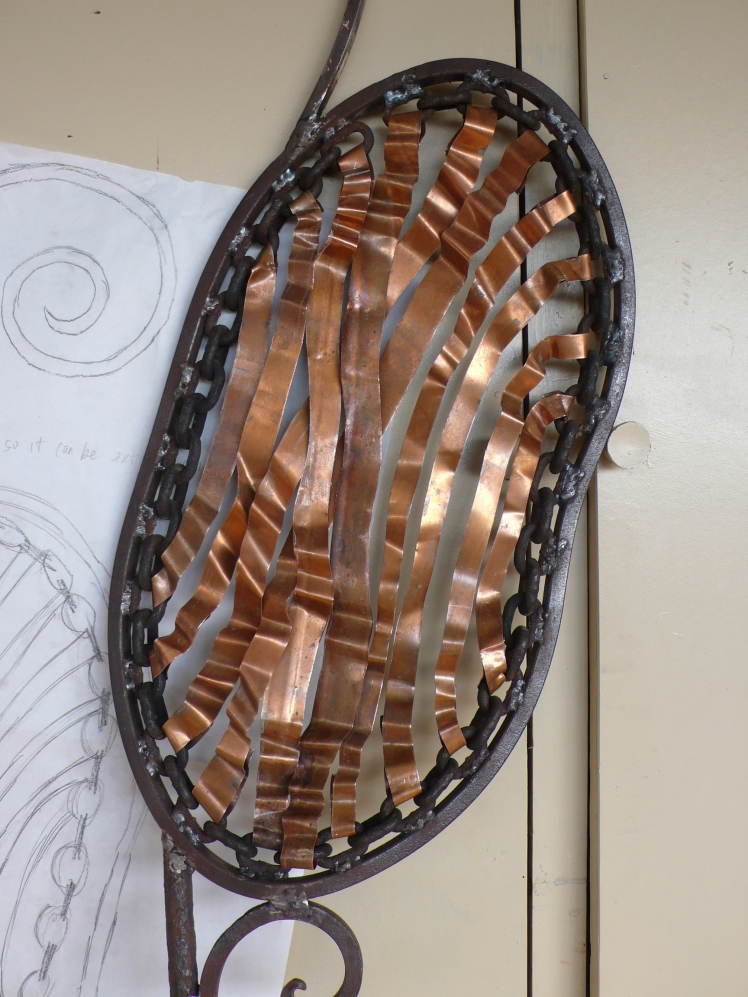 Once 2 objects were made, I started to apply the verdigris as I knew that it would take time to build the surface. The verdigris seed had been developing for a couple of months, so it was ready to use late winter. The seed was created by suspending a copperplate over a diluted bath of vinegar, covered with a plastic bag and left it to develop. After 2 weeks I scraped the blue copper powder from the surface of the plate and put it in a jar ready to use later. I took care to wear gloves as this material is toxic! This process was repeated three or four times so that I had enough powder to apply verdigris to the surface of the sculptures. I did this by painting oxidising liquid and then dabbing the blue powder onto the copper surfaces. The copper weaving was then positioned over the same vinegar baths and covered with a large plastic bag. Two weeks later the sculptures were bright blue! It was at this point I was able to tone the colouration back by treating the surface with wax. it’s a specialized hard wax, that slows the verdigris process down but doesn’t stop it completely. So, maintenance to the sculptures will be to give the copper a light wax polish annually. 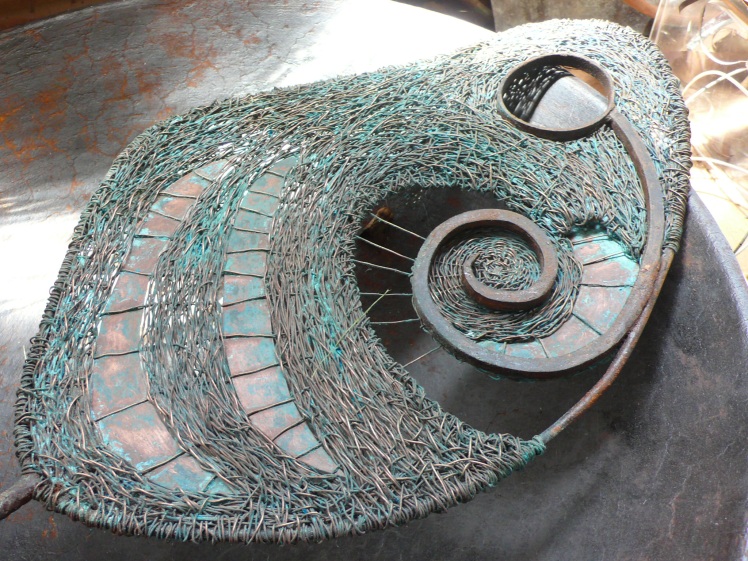 I was pretty busy in Spring with other work commitments, so I was only able to grab an hour here and there to start weaving the large wing. It wasn’t until late December and into January that I was able to get into the studio and finish the work. I needed to finish weaving the large wing, weld the two wing shapes onto the baseplate and apply verdigris to the large wing. There was so much to do! I think this sculpture took me so long to create because I had such a busy year in 2019. It’s also been two decades since I created metal sculpture, so I really had to think through every step of the way carefully.

I would like to thank Margret again for trusting me through this process. Making the artwork was very enjoyable as when I shared the developmental process, she was supportive and complimentary. I would also like to thank David Waters, who talked me through a process when I needed it. He has a lot of experience working with diverse materials as a sculptor. His stone plinths have added something special to the work.

How I understand the forms…

To end with I would like to explain how I understand the forms of the sculptures. Art is subjective and each viewer brings their equally important perspective to viewing the sculptures. But my ideas are…the butterfly wing is one that you may pick up from the ground and wonder about the amazing patterns in nature. It is a fragment we hold up for a closer look to view and appreciate. It is not a design from scientific observation but from my imagination.

The large sculpture I view as an abstract bird where the focus is on the position of the wings so that flight is implied. There is a dominant wing shape which is an old cartwheel from a friend’s property in Mollongghip, and truth be told was the starting point for the work. Another wing shape steps out of this dominant wing shape to depict the fluttering of the bird’s wing, it implies movement.

Margret created the lead light pieces… and this small collaborative aspect to the project is a symbol of us working together to create something we are both are happy with. I had an Open Studio on Sunday January 11 in 2020, when Mollongghip locals and members of the Western Fibre Artists from Bacchus Marsh came to view the work. A lot of people thought the glass pieces just finished the sculptures perfectly and I too think they add a highlight to the sculptures and are a great finishing touch. I have personally named the works Moment 1: Butterfly Wing and Moment 2: Bird Flight but they are in Margret’s hands now and I think she should have naming rights as she will live with these creations and make her own meanings of them over an extended period. I release them to her…